Linda and I took weekend off in October and traveled to Chicago. We both love architecture and Chicago has great examples of innovative buildings, both old and new.

I will quietly confess that the thought of pulling out my backpack with Canon DSLR, standard lens, wide angle lens and long lens, for day-long expeditions did not thrill me. Even the thought of ditching the wide angle and long lenses and just going with my cannon of a Canon and lens felt big. Doable, but big. Cumbersome. Heavy. Not … fun.

My friend Evan Mitsui has been extolling the virtues of his Fujifilm X100s for a couple of months. He even used it as a primary camera during a trip to New Zealand. After trying his camera out a few times, it seemed an ideal camera to take with me (my own, though, not his. That would be mean).

It wasn’t an easy decision. There’s a natural tendency to want everything in a convenient package: zoom lens, high quality sensor, optical viewfinder, and size of camera all felt key. The focus of my pictures, I thought, would be the city’s architecture. I looked at a number of cameras, and came down to two possibilities: the Fujifilm x100s and the xPro1, which is similar but with changeable lenses. The latter had enough unflattering reviews that I was put off (though I have tried it and I completely understand the camera’s charms).

I remembered when Linda and I went backpacking in 1999 and I took the fondly remembered Yashika T4 Super D, which had a 35 mm Zeiss glass lens, and how much fun I had with it. Light, portable, simple. So, x100s it was. The wide 35 mm lens gave the the opportunity to get close, take in vistas. I remembered it as an all-purpose lens.

It took a while to find the camera. 3 stores were sold out, but find it I did, at Downtown Camera. Now, camera in hand, I had a few days before the trip to try out the camera.

Some aspects of the camera were immediately appreciated. I Loved the optical viewfinder. I found the electronic viewfinder wasn’t half as bad as I thought it would be (though it is still a bit like looking through at a cctv screen). Having the ability to change fstop using a dial on the camera barrel is a hoot. So what was holding back the sheer delight? Lack of zoom. I was interested in architecture, and for Chicago I realized that meant primarily exterior architecture and I kept wanting to zoom into details.

I couldn’t get where my eye wanted me to go!

Gradually, though, in the space of a few days, it got better. I stopped looking at what I couldn’t take, and started to look differently at what I could take pictures of. I started to see through the lens. And had a blast.

This camera is a joy to work with. It’s a very different experience than using a large dslr, but that’s actually a good thing. It felt waaay less cumbersome for traveling, popped into my daybag when we were out and and about, and while most of my shooting was limited to early morning jaunts while Linda had a chance to sleep in, I’m really pleased with the pictures I took. The first picture I posted, of Chicago’s famous Anish Kapoor Cloud Gate sculpture garnered over 15,000 views when it was posted (that felt nice).

And reviewers are right, the look of the pictures really are great, and different than I’m used to. I played around a bit with the filters but mostly shot ‘Provia’ with heightened colour and, yep, it works. Check out this picture, from a morning at the Art Institute of Chicago. There’s no post-processing, other than taking out some barrel distortion from trying to make lines straight with a 35 mm lens:

So will I give up my Canon dslr? Nope. It has too many advantages. In a few weeks I’ll join my friend Ruth Gillson and shoot some stage performance and it’s pretty hard to beat a full frame DSLR with a fast 70-200 for that kind of work. But this advanced compact camera has got me seriously eyeing mirrorless cameras for our extended vacation next February. 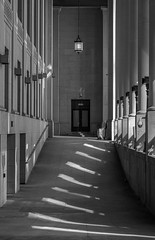