I love trying to photograph the coast in a way that expresses the change (and, yet, lack of change) as land appears and disappears; as the repeats its cycle, rising and falling again and again and again. It’s both timeless and ever-changing.

Along the St. Lawrence River

Quebec’s St. Lawrence River is tidal, and artist Marcel Marcel Gagnon created an artist centre on its shore, using it as a base to create art and to sell his paintings (and, later, those of his family and others).

Gagnon also began working on Le Grand Rassemblement (The Great Gathering) there in 1986, first painting various characters on canvas, then sculpting them from concrete. Dozens of rough-hewn statues now grace the shoreline and form a line into the St. Lawrence River.

Watching figures that appear (or disappear) with the St. Lawrence River tide is remarkable.

The appearance of the statues varies dramatically during the day. In the morning the light brings out their facial appearances. As the sun warms the concrete fades. As the tide rises, waves crash against them. Torn flags on the rafts whip in the wind.

Moving with the times

As the sun goes down, the figures become silhouettes, many appearing to drown as the tide rises over their heads.

The Marcel Gagnon Art Centre and its remarkable concrete figures can be found in St. Flavie, along the southern coast of the St Lawrence River. 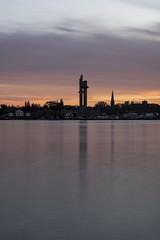